Race To Lift The Inch Dumbbell

Not a clean lift - tilted and losing control at the top, but progress nonetheless. Came off a week of de-load of almost all strength related activities. Starting to get a good hop going lefty. 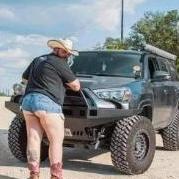 Got a couple lifts with my right and one with the left today with my 135# Baby.