By Horrido,
January 7 in Bending

I think it´s time for an own thread, as the last days show, that this year can become very special again for the steel bending world. it started with the following threads from Tommy: 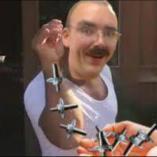 Well, you guys talked me into it. Honestly I couldn't stay away. It's been some time since I bent or did any physical activity besides walking, so I have a ways to go before I regain what I have lost.

As it is important to get also new benders in line, here are some thoughts for the beginning and the intermediate: To strive for the red nail cert there are some simple facts: only bending in IMP