Getting back into grip. 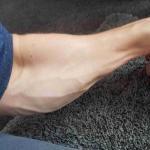 By mcalpine1986,
November 4, 2019 in Workout Reports and Training Routines