Road To Crushing The Blob And Pinching The No.3 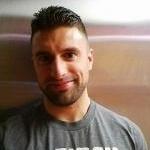 By Anthony C.,
October 12, 2013 in Workout Reports and Training Routines

Results from the king kong 1h euro 69 1haxle 136 Hub 53 Lbh 141 Was very pleased with my performance! I would have liked better on the hub, but this wqsn't really the event i was focusing on dur

So yesterday i trained at john mannas house with chez, jose and another friend mike. Had a great time and i closed the 3 twice. I submitted a video for mm0 but unfortunately got two reds and one whi

little hands can still be strong: