Here's the thing...everyone has a natural starting level that they quickly achieve in the first few weeks or months. After that, it takes consistent action and time. The gains soon be come almost 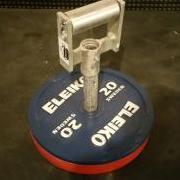 I felt this close, but it was a really bad angle. https://www.youtube.com/watch?v=XyNjK4KD3Zc&feature=youtube_gdata_player

http://www.youtube.com/watch?v=L_QYVgDUbOw&feature=c4-feed-u# Got my right hand strength back up to the coc#2.5 again. I feel this time around the close on this gripper was way more solid and a