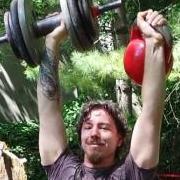 Hi everybody, and thank you for letting me in I'm a 53 year old Young man from Sweden with a gripaddiction, but I'm sure I'm not the only one. I was introduced to gripstrength a few years ba